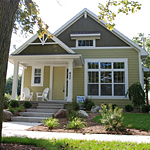 Avondale Square has been identified as part of the City of East Lansing's Neighborhood Revitalization Strategy Area (NRSA). By identifying the neighborhood as a NRSA, the City was able to receive $1.5 million in federal funds to address street, sewer and sidewalk improvements; housing rehabilitation; and down payment assistance to income qualified households.

The City of East Lansing, Mayberry Homes and Capital Area Housing Partnership have worked together to design Avondale Square to strengthen the City’s appeal to homeowners and provide opportunities for young families to live in East Lansing. The project is within walking distance of elementary, middle and high schools within the East Lansing Public School system and within a short walk of the City’s downtown.

The completed neighborhood now has 26 single-family homes, as well as a community pocket park.