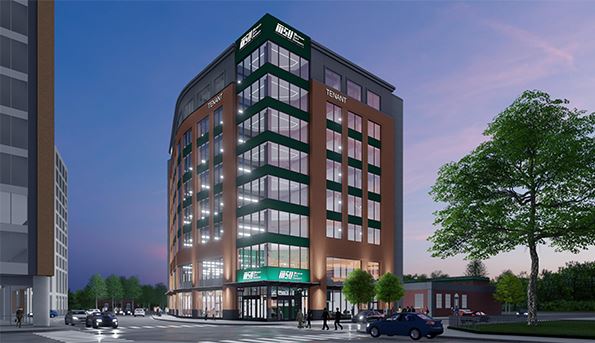 East Lansing voters will see a proposal on the March 10, 2020 Presidential Primary Election ballot for the potential sale of City-owned land to Michigan State University Federal Credit Union (MSUFCU) for construction of a five- to eight-story branch and innovation office space in downtown East Lansing. View the updated concept renderings.

The ballot proposal will ask voters if the City should be able to sell approximately 13,250 square feet of City-owned land at the northwest corner of the Albert-Abbot intersection for construction of the new MSUFCU commercial building. Within the building, MSUFCU is planning to have a branch office on the ground level, a community room and office space for various MSUFCU operations, including the expansion of the MSUFCU Innovation and Education Center’s internship program.

The Abbot/Albert Avenue Parking Lot, also referred to as Lot #4 or the Dublin Square Lot, is currently located on the land and, with the planned alignment of Albert Avenue this spring, additional land adjacent to the lot would be included as a part of the potential sale. A professional appraisal firm has appraised the land at $810,000, which would be used as the purchase price. If the land sale is authorized, MSUFCU could move forward with the project; however, it would still go through the City’s normal approval process.

In order to allow Michigan State University Federal Credit Union (MSUFCU) to construct a five to eight story commercial office building, not to exceed a height of 112 feet, which may include an MSUFCU branch office, intern center, office space, and a community room that may be utilized to host MSUFCU, MSU and non-profit events, shall the East Lansing City Council be authorized to sell for Eight Hundred and Ten Thousand Dollars ($810,000.00), as fair market value determined by its recent appraisal, approximately 13,250 square feet of City-owned land at the NW corner of Albert Avenue and Abbot Road, commonly known as Parking Lot #4, to MSUFCU?
View All
/FAQ.aspx
Public Meeting Portal
Follow Local Meetings